The citizens of Hartland were understandably concerned over the loss of one of their largest businesses with the abrupt closing of the American Woolen Company Mill in 1932. Most folks understood this wasn’t just about the people who had lost their jobs at the woolen mill but also the trickle down affects which could cripple the entire town without another major industry to support it.

The Hartland Chamber of Commerce, formed in 1929, were the first to lead the search for new industry with a promotional brochure in 1932.

Our thanks to Hartland Historical Society Members Raymond & Beverly (Neal) Martin for their gracious donation of the original records of Hartland Mills, Incorporated. These detailed documents, including meeting minutes, ledgers, deeds and stock receipts, were kept by Raymond’s father, Ervin W. Martin, who was an early Director and also the Secretary beginning in 1940 for the company for many years. Ervin organized the records into albums and kept them safe and intact for the benefit of future generations. We are still in the process of photographing the entire album and will be adding future content in the future but some of the major content highlights are presented below.

Much of the American Woolen Company’s other real estate holdings in Hartland had been sold during the Great Auction of 1932 , but the main production buildings still stood unused and abandoned. Without a clear and acceptable business suitor to take over the former buildings, various options were discussed as citizens began to formally organize to take control of their own future and the town’s destiny.

If…Hartland Goes to the Dogs

The Shoe Shop plan never came to fruition however it did not stop the citizens from pursuing other options. A new plan of action called for taking over the remaining buildings and investing in the required upgrades, repairs and maintenance financed through the same stock shares plan. They would set their sites on finding a suitable business to lease the properties on a long term basis.

Another steering committee headed by Merrill A. Moore was formed and included Elmer Burton, Rae F. Randlett, Frank L. Griffith and Lloyd Cookson. It was eventually decided to create and incorporate as a company to take over the former mill holdings with $10,000 worth of Capitol Stock offered to interested citizens in 2,000 units valued at $5.00 each.

The grassroots movement secured roughly $4,100 worth of initial stock share commitments from 51 citizens by the time it held its first Stock Subscribers Meeting to vote on empowering the committee to officially incorporate as “Hartland Mills, Incorporated”.

The committee took little time to move on their subscribers empowerment to create Articles of Association and incorporate. The signers of the original article were Merrill A. Moore, Rae F. Randlett, Frank L. Griffith & Lloyd V. Cookson.

On December 17, 1934, the Articles of Association for Hartland Mills, Incorporated were presented and signed in the Law Offices of Butler & Butler in Skowhegan and recorded in the Registry of Deeds on December 19, 1934. Following the signing, Merrill Moore was elected temporary Chairman and Lloyd Cookson was elected temporary Clerk until the first official meeting of stockholders could be held.

Immediately following the election of Directors, the first Officers were also elected:

One of the first orders of business for the newly created company was to collect funds and issue stocks from their pledged subscribers. On January 2, 1935, the first official stock certificate of Hartland Mills, Inc. was issued to Frank O. Thompson for 20 shares ($100.00). As noted in the December 28, 1934 Directors Meeting above, Mr. Thompson was leaving for Florida for the winter and the stock was post-dated for him. 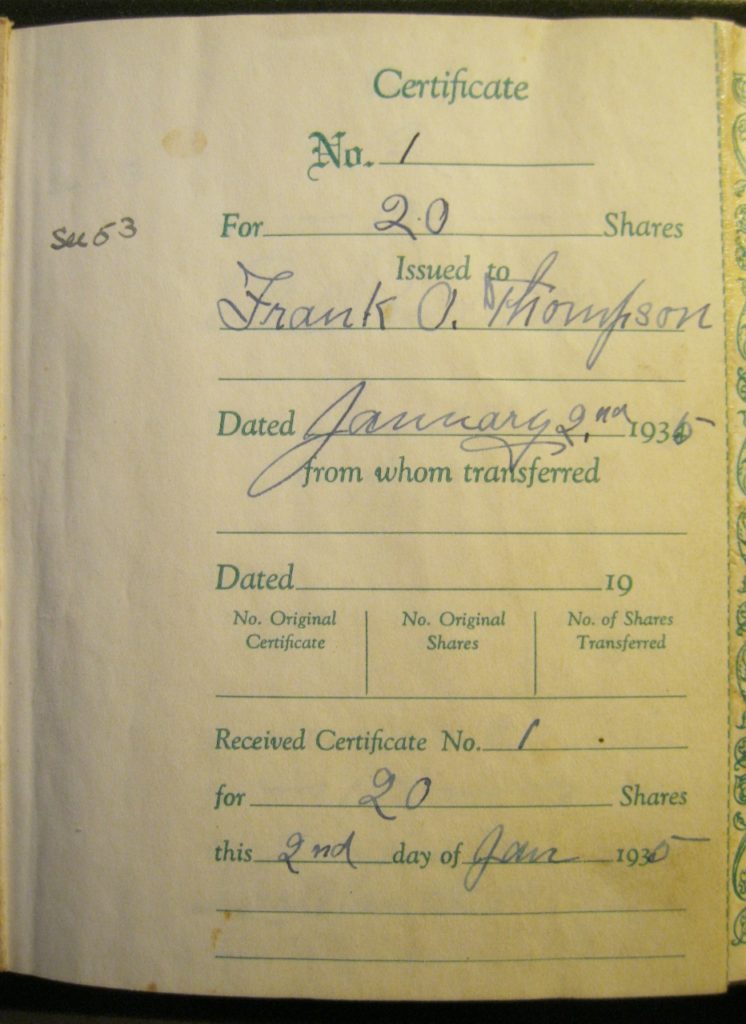 The stock certificates given to the stock holder were numbered, signed and officially sealed by Treasurer Carl Randlett. Stock purchases (and later stock transfers) were made by numerous Hartland citizens, businesses and civic organizations over the years of the existence of Hartland Mills, Inc. eventually totaling 1,906 shares. The original stock book contains each of the stock holder transactions in order of sale however much of the original stock purchased was sold or transferred for various reasons over the years.

The goals of Hartland Mills, Inc. were to keep the mill facility physically intact, make needed repairs and find a suitable buyer to take it over. They needed to get the mill and its grounds back in top condition for potential investors. Many former woolen mill employees and numerous townspeople provided their time for minimal or no pay to assist in cleaning, repairing and preparing the mill for sale.

Hartland Mills, Inc. Advertisement with Artist Rendering of the Mills – 1935

The advertisement below appeared throughout various publications nationwide noting the great potential of operating a business in Hartland.

Throughout 1935, there were several offers made to lease or buy the mills including one offer to start a ladies garment company. None of the offers were accepted by the Hartland Mills, Inc. with Directors siting unfavorable lease conditions or various other unacceptable terms requested by the potential buyers. In the meantime, monthly meetings were held and work continued on various projects at the mill including removing debris, repairing broken windows and fixing leaks in the roof.

There were also discussions on the sale of some of the smaller buildings including the former Blacksmith Shop to the town to be used as a Fire Hall and Main Woolen Mill Office Building as a site for the Hartland Public Library.

One of several woolen mill properties controlled by Hartland Mills, Inc. was the former Main Office building built by the Linn Woolen Mill in 1862. In May of 1935, Trustees of the Hartland Library were denied a proposal to purchase or lease the building although the Directors did offer them the former Robert E. Latty Block lot next to the Drug Store on Main Street should they desire to build a new building.

At a special September 25, 1935 Stock Holders Meeting on the topic, Library Trustees Dr. Charles A. Moulton & George M. Lancey again pleaded their case in detail. This time the proposal was accepted by a substantial majority of the stock holder shares. (Each share equaled one vote)

Following a special Town Meeting to formally vote on the proposed sale, it became the first dedicated home of the Hartland Public Library.

The new home of the Hartland Public Library – 1935

In April of 1935, a letter from the Ohio Carpet Company to Hartland Mills, Inc. stated it had a firm interest in locating a business at the mills pending the process of a loan they were confident would be approved. Negotiations between the two parties began at once and included an offer of a 10 year lease with a final buyout of $14,000 along with 10 years of (potential) tax abatement and a “spirit of cooperation in every way”. An engineer from the carpet company was sent to Hartland to survey the site on April 18th and a contract was signed with their representative, George Wallace, that June to establish a new carpet manufacturing operation in the former woolen mill.

In order to complete the remaining needed repairs on the various buildings, Hartland Mills, Inc. voted to take out a $15,000 loan via the Reconstruction Finance Corporation (RFC). Plans by the Ohio Carpet Company to begin shipping equipment were in place by September and it appeared Hartland was going to have a major industry again.

However, at a November 27th Hartland Mills, Inc. Directors Meeting, they were informed the Ohio Carpet Company had backed out of the deal siting an inability to raise sufficient capitol after their loan application was rejected by their bank. Undoubtedly frustrated, they remained completely focused on the goal and they set their sights on finding another potential investor.

On December 14, 1935, the Directors were inform of a request from Irving Tanning Company of Peabody, Massachusetts to meet with the group and tour the mill with an interest in establishing a new subsidiary for their company. Hartland’s future was about to change once again.

Although the Hartland Tanning Company successfully began operations in 1936, Hartland Mills, Inc. had leased the facility and still owned all the property & buildings. The lease contract included numerous improvement projects which needed to be completed by Hartland Mills, Inc. including installation of a generator with a water wheel at the dam to power it, installation of a sprinkler system as well as the disposal of several of the smaller buildings which sat on the island. Numerous other improvements included removing left over woolen machinery, repairing all the broken windows and repairs on the roof. Now that a new business had been secured and income was being received from the lease, they could also begin paying dividends to their stock holders and by 1955 they sold their remaining interest to Meyer Kirstein and dissolved the group.

In 1950, an alphabetical listing, along with the then current stock share owners and quantities was compiled by Beverly Neal (soon to be Mrs. Raymond Martin) who had just begun working in the office of Ervin W. Martin’s logging operations located on Commercial Street.